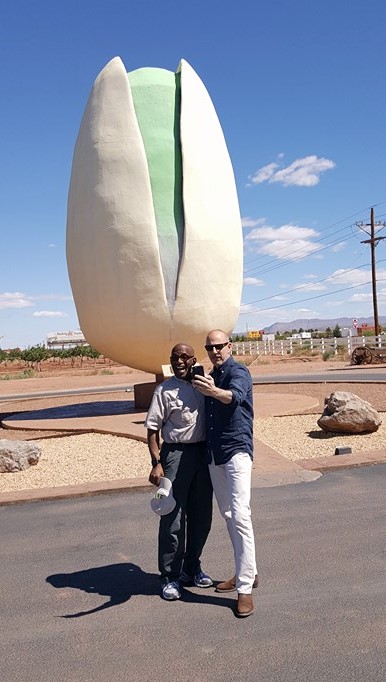 The World's Largest Pistachio was built in honor of PistachioLand's founder, Thomas McGinn. After his passing in 2008, his son, Timothy McGinn erected this 30 foot sculpture in memory of his father. Tim wanted everyone who passed by PistachioLand to take note of what his dad created, a 111 acre pistachio orchard and vineyard, started from bare desert land in 1980. From the first trees planted to today, PistachioLand now is home to over 12,000 pistachio trees and 14 acres of wine grapes, McGinn's Country Store and Arena Blanca Winery.

The World's Largest Pistachio is visited by people from all over the world and you can see many interesting and funny pictures about it online, in magazine articles and even on t.v.. Some of them include: "This Must Be The Place" (2011 starring Sean Penn and Frances McDormand), Larry the Cable Guy  "Only In America" 2012 Episode "Lost in Space" on the History Channel, and most recently in 2017: "Ride with Norman Reedus" on AMC, Episode 4.  The NM Secretary of Tourism named the big nut a NM True Treasure and it is considered by some to be an Alamogordo NM landmark and most visited tourist destination, after White Sands National Monument.

There are no products listed under this category.